While Golden Retrievers in general may be the sweetest dogs on earth, individual Golden’s can and do bite from time to time for various reasons. So why do Golden’s bite, what is the bite force of a Golden Retriever, and how can you stop adults and puppies of this dog breed from biting?

A golden retriever’s bite force is estimated at 190 PSI, ranking 30th among the strongest bite forces in dogs. Golden retriever puppies are taught at an early age (by their mothers or their breeders) to bite softly, making them a much less dangerous breed of dog.

Let’s take a closer look at a golden retriever’s bite force in PSI.

PSI stands for pounds per square inch. It is a way to measure the pressure of force in a given square inch of area.

A playful dog nip isn’t going to have the same PSI force as a bite filled with aggression or fear. Humans only have a bite force of about 100 PSI to 150 PSI. On average, a canine has the potential to have a maximum bite force of around 230 PSI when provoked.

How Strong Is a Golden Retriever’s Bite Force?

Golden retrievers have a bite force of 190 PSI. It makes their bite strong at this PSI level, but it isn’t as dangerous or deadly as some other dog breeds. In a ranking of dogs with the highest bite force, the Golden Retriever breed ranks only 30th when it comes to powerful bites.

Dogs with the strongest bite force are:

The breed with the strongest bite force of any domesticated dog in the world is a Kangal Dog, with its bite force being 743 PSI. It was bred to protect livestock from predators in Turkey. You may have noticed that you haven’t heard of many (or maybe any) of the dog breeds with the strongest bites. These dogs were bred for doing battle with man and beast, and as such aren’t common breeds (at least in the United States).

As you can see, the bite force of a Golden Retriever, while still a painful bite, is way down on the list of the most powerful biters. It might be helpful to compare the bite strength of some dog breeds that are more commonly found as household pets.

While these breeds aren’t at the top of the pack when it comes to bite strength, they can all still provide a painful bite, including a Golden Retriever.

Golden Retrievers bite for different reasons, and not all bites are done at full strength. Let’s take a look at the reasons a Golden Retriever might bite.

Why Do Adult Golden Retrievers Bite?

Most adult Golden Retrievers will only bite out of fear or provocation as they aren’t generally considered an aggressive dog. Despite learning bite inhibition, fear is the biggest and most likely reason your dog is biting. Anxiety will also increase the likelihood of a bite. When a dog is scared, they will do whatever they can to protect themselves. Their level of fear will also determine the amount of biting force they use on the thing or person they are afraid of.

A full-grown Golden Retriever may also bite when they are playing, also known as mouthing. This is primarily a learned response. It’s a behavior that the dog owner has knowingly or unknowingly encouraged, and is considered by the dog to be all in good fun. For instance, they may bite when they are wrestling around with their owner.

Allowing this biting behavior to continue is never a good idea as you never know when your Golden Retriever might get a bit more wound up and bite too hard. In addition, a light bite that isn’t a problem for you might present a much bigger problem if it is used on a child or someone else. You should never purposely let your Golden retriever bite you.

Why Do Golden Retriever Puppies Bite?

Golden Retriever puppies often bite if they are teething or playing. Sometimes it can be learned behavior from you or a previous owner. The point is that in order to stop your golden retriever from biting, you’ll need to understand first why they do so.

When a dog is a young age (between four and six months old), the biting is typically just a result of them teething. Their baby teeth are falling out and their adult teeth are coming in. Just like in humans, teething is a painful experience and some of the pain is alleviated by biting and chewing. 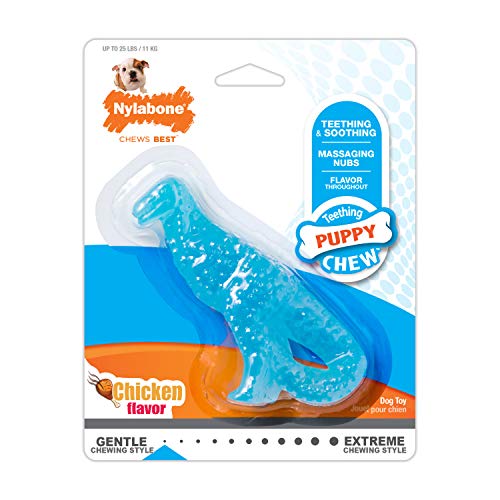 A puppy teething toy like this one at Amazon is good to have if teething is the cause of the biting problem.

At this age, Golden retriever puppies are also learning to control their own bite force. Golden retrievers are taught by their mothers and other litter members that biting too hard hurts. This trains the puppies at a young age not to bite other animals or people. As a new puppy pet owner, this responsibility falls on you as well.

While puppy biting might seem cute and harmless, allowing your puppy to bite you is conditioning them that it is okay, and could become a habit exhibited by your adult Golden later on when it’s more difficult to correct.

The Different Bite Levels of a Golden Retriever

There are six different levels of bites that your Golden retriever could attempt if it’s afraid or provoked. The force of their bite at each level will differ depending on the dog’s personality and level of fear.

How To Stop Golden Retrievers From Biting

To truly stop your golden retriever from biting, it’s crucial to determine the cause of the behavior. Once you know that, the tips and tricks below will help you eliminate the harmful habit and protect you, your dog, and your loved ones from future mishaps.

Of course, these are only suggestions. No matter how friendly they are, no matter the breed, all animals are capable of biting at full force when provoked or scared. It’s essential to practice the safe handling of all dogs at all times.

Use the Deterrence Method

Using deterrence is telling the dog or puppy “NO” in a firm and loud voice. This shows the dog that you are in charge and deters them from engaging in the habit.

This the first method dog owners will try when teaching their dogs and puppies not to bite. It’s relatively simple to do.

However, this doesn’t always work, especially with puppies, who aren’t as familiar with your tone of voice yet. If it isn’t working, try using a water bottle in addition to a firm “NO.” Spray the puppy or dog in the face when they start biting and use a firm “NO” simultaneously. These techniques will help reinforce that biting is not approved behavior.

If you’re struggling to get your puppy or dog to listen to you, try taking them to obedience classes. Classes will socialize your dog and encourage positive behaviors when meeting new people or animals.

It’s also helpful if you try to introduce your golden retriever dog to a new person every day. Meeting new people will not only further their socialization outside of their obedience classes, but it will also give them a chance to see you with new people. Dogs take many of their cues from their owners, so seeing you in a relaxed setting with as many people as possible will help ease their anxieties.

Bite inhibition is the action a dog takes to adjust their bite force. When a puppy is still young, its mother punishes it if it bites too hard. Therefore, you, as the owner, can do the same thing. When your puppy bites too hard, give them a firm “NO” or spray them with a water bottle. This teaches them that biting is not okay.

Bite inhibition is something that most dogs learn as puppies when they are still with their parents and the rest of their litter. Other dogs teach it best, but their owners can also teach it. See my post here for more info on teaching a Golden retriever puppy to stop biting.

It can be frightening, frustrating, and downright scary when a dog bites, even if it isn’t done aggressively. It’s important to find ways to break a Golden retriever of its biting habits, whether it’s a puppy or an adult, before it becomes a serious problem.