Just like in human beings, young Golden Retrievers also lose their baby teeth at a certain stage of their development. This process is known as teething. A Golden Retriever who’s teething will be in some discomfort and you may begin to notice him chewing on inappropriate things around the house to try to ease the pain. The exact age at which a Golden Retriever starts teething can vary from one dog to another.

On average, a Golden Retriever will begin to lose their baby teeth at around 6 months of age, as their adult teeth grow in. Some Goldens, however, can start losing their puppy teeth (also called deciduous or milk teeth) as early as 4 months of age or as late as 7 or even 8 months of age.

To better understand the process of how and when Golden Retrievers shed their teeth, we’ll address the following questions in this article:

Does Excessive Chewing Cause a Golden Retriever’s Baby Teeth to Fall Out?

Golden Retrievers have a well-known behavior of chewing almost anything and everything they come across. As a result, they are known as natural-born chewers.

While chewing is a common habit in most dogs, Golden Retrievers chew more than the average dog breed. You may have already caught your puppy tearing away at your slippers or shoes, right? So why do these pups chew so much?

Here are some reasons why Golden Retrievers chew a lot:

Your Golden Retriever will insist on chewing on things throughout his entire life. Fortunately, as your Golden gets older you can direct that chewing behavior to only appropriate items like tennis balls and chew toys.

What that means is that chewing is not solely part of the teething stage. This action is more of a habit. It could also be genetic, seeing as how Goldens were originally bred to be retrievers; hence they need to learn how to control their bite force in order to retrieve game without damaging it. One of the ways they do this is by chewing.

Recommended Reading: Bite Force of a Golden Retriever in PSI

While it’s normal for Golden Retrievers to chew, you cannot allow them to chew on inappropriate or harmful things. For example, you wouldn’t want every pair of shoes in the house to be completely destroyed by your dog. So here are a few ideas on how to stop your Golden Retriever from chewing on anything harmful or inappropriate:

Although chewing some hard objects may cause your pups’ baby teeth to come out, this will only occur when your dog’s teeth are ready to come out on their own.

Symptoms of Puppy Teething and How To Deal With It

Now that you know your Golden Retriever will start losing his teeth between the ages of four and 8 months, you might be asking yourself about the signs of teething and what to do once you notice these signs. Here are some of the most common symptoms of teething:

So what do you do when you see these signs?

First, rest assured that all these are normal happenings. It means your Golden Retriever puppy is growing just as he should. If you haven’t already, it’s time to get a large assortment of objects and toys for your pup to chew on. This is to help your dog relieve the pain he’s feeling in his gums during the teething process. 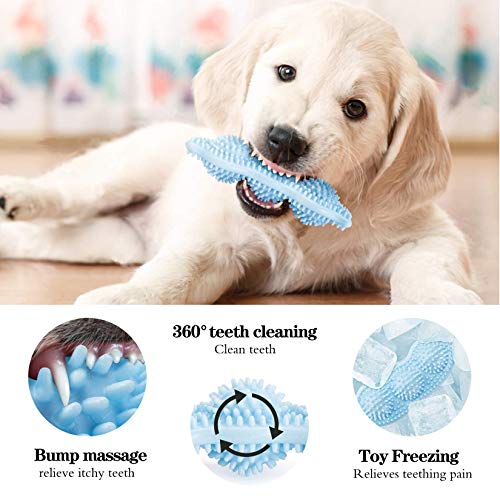 A chew toy like the one pictured above (Amazon) is an excellent way to help your Golden with his painful teething issues. The nubs on the toy relieve the uncomfortable feeling in his teeth, and you can even freeze the toy to help with the pain of swollen gums.

To lessen the teething pain further, you can try placing a few small pieces of ice cubes in his mouth. You may also rub your puppy’s gums and teeth gently with your fingers. Not only can this help to ease the pain, it will prepare him for when you begin brushing his teeth later on.

At some point you may notice some gaps in your Goldens mouth and realize that some of his baby teeth are missing. Which may cause you to wonder if your Golden Retriever maybe swallowed their lost baby teeth, because you haven’t found any lying around the house.

As a general rule, teething Golden Retrievers often lose their baby teeth while eating or chewing, causing them to swallow the teeth instead of them falling out onto the ground. A Golden Retriever swallowing their lost puppy teeth is no cause for alarm, as the baby teeth will harmlessly pass through their system.

Your Golden Retriever will obviously not talk to let you know it has lost, or chewed and swallowed, a puppy tooth. Unlike like in small children, where you’ll easily spot gaps between the teeth, you may not notice if your pup has lost some teeth. It’s, therefore, upon you to remain vigilant and take note of these milestones.

Most dogs, Golden Retrievers included, will lose their baby teeth as they eat and swallow them together with food. Some may lose them during object or toy-chewing. You might not come across any of your Golden Retrievers’ teeth throughout the teething phase. But don’t worry about that since swallowing teeth in dogs is completely harmless. The swallowed teeth will easily go through the dogs’ digestive system and out through excretion.

Another thing to note about teething is that pups lose their baby teeth systematically. This starts with the incisors, then canine, also called fangs, and finally premolars. However, this is not a hard and fast rule when it comes to tooth loss.

It’s also important to note that there are no baby molars in growing puppies. Molars come in with the new set of adult teeth.

How Long Does It Take Golden Retrievers To Grow Adult Teeth After Losing Baby Teeth?

All dog breeds, including Golden Retrievers, will start developing baby teeth at 3-5 weeks. You’ll first notice the upper jaw’s incisors’ development immediately, followed by the lower jaw. A full set of 28 baby deciduous teeth will finally occur at around the sixth week. But once the baby teeth fall out, when will a Golden’s adult teeth grow in?

This is why you’ll hardly notice any gaps during the teething period in a Golden Retriever puppy. The gaps are filled in very quickly by the adult teeth. In the end, your Golden Retriever will have 42 permanent teeth in his mouth, including molars.

It is recommended that you perform regular checks on your pups’ mouth when adult teeth start to develop. In some cases, you may notice a baby tooth that has refused to budge even after an adult tooth has fully grown behind it. If this happens, take your Golden Retriever to a vet for diagnosis.

What Age Do Golden Retrievers Stop Chewing on Everything?

If you have a Golden Retriever puppy who is chewing on everything he can find in the house, you’re probably wondering when is this excessive chewing going to stop?

In general, a Golden Retriever puppy will want to chew on everything until they are through the teething phase at between 6 to 8 months of age. At this point, the chewing will lessen, but Golden Retrievers will continue to chew throughout their lives. By then they will have learned to only chew on appropriate items.

Teething is a natural stage in a puppy’s dental development. Your Golden Retriever will lose his baby teeth between the age of 4 and 6 months, as his adult teeth are pushing through the gums.

It’s important to note that teething may be a painful stage in a young Golden’s life, during which, his chewing habits may become even more pronounced. If you’re aware of the signs of teething, you can help your Golden Retriever through this period by providing plenty of appropriate items to chew on.